Something amazing happened over night.  Where everything had been all snow and ice the day before, it had rained the previous night and as we headed out in a southerly direction, all the snow was GONE.  At first I was a little confused thinking that perhaps the snow started further into the journey but as we drove and I recognised places I realised that indeed all the snow from the day before had all disappeared in the rain.  Now I don't know how much it rained the night before but this was a different Iceland that was rolling in front of my eyes and I came to appreciate the green of the moss that seemed to grow on everything and the black of the volcanic rocks that lay sprawled out everywhere.

On the agenda for the day was a portion of the south coast.  We wanted to see the volcano that had erupted in 2010.  You guys all remember the one that halted all the European flights and left all that volcanic ash on your cars a few years ago?  So we headed out in the now greenish snow free land making our way east along route 1 where there is miles and miles of open space filled with mountains and streams and rivers with the odd town (Selfoss) and others that you pass through.

The first thing to catch our eyes - right from the road was - Seljalandsfoss Waterfall. 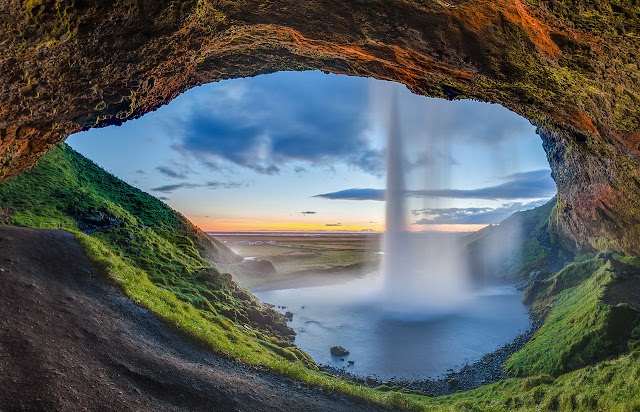 Now I have seen a lot of pictures of this, but all the ones I saw were taken in summer so I didn't at first recognise this as the place that Ryan (Nicky's boy) had been to. 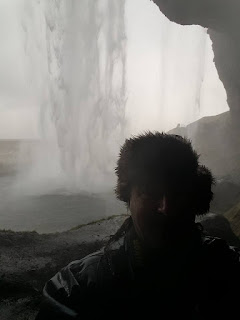 It's a stunning stream of water cascading off the mountain - its origin in the volcano glacier Eyjafjallajökull into a pool of water that runs swiftly off to the ocean which you can almost see in the distance.  If you follow the path you are able to go around and behind it - which Pete did - but you certainly do end up completely soaked!
I ended up soaked just standing in front of it.

The picture above is what it looks like in the summer (enhanced perhaps?) and to the left what it looked like for Pete in the winter.  Its stunning and one of Iceland's most popular attractions 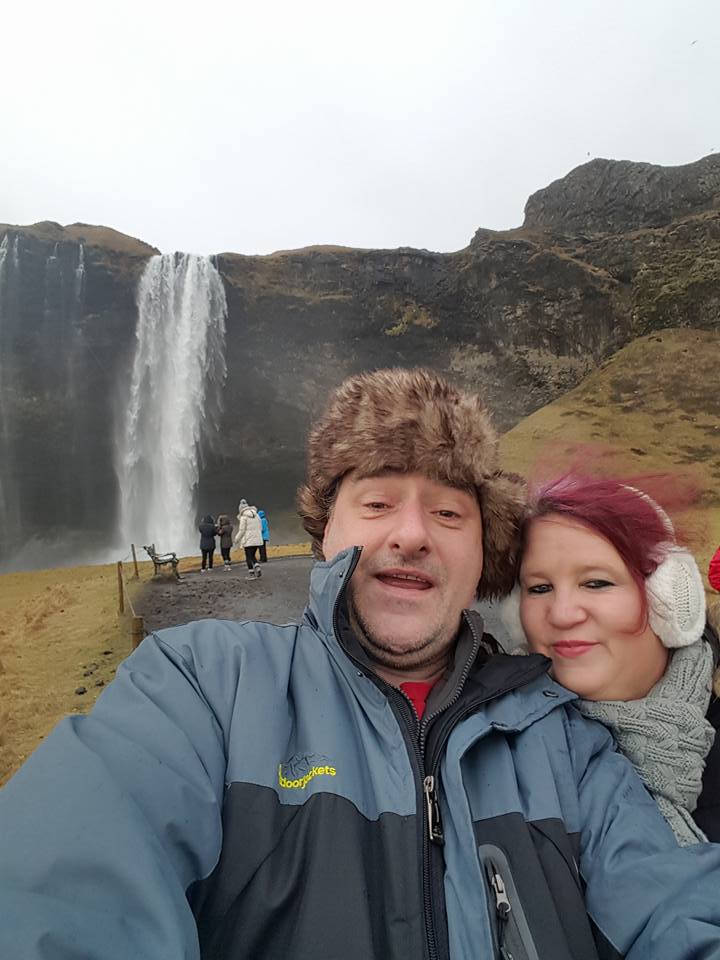 Next we were off to the Volcano Glacier Eyjafjallajökull 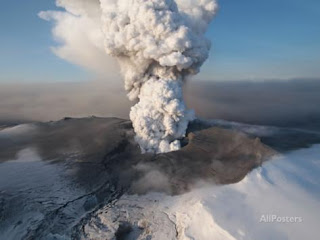 Literally just around the corner from Seljalandsfoss Waterfall, this was a bit of a surprise.  When you think of volcanoes you think of high pointy-top mountains so we would have almost driven right past this one had it not been for the signs and the welcome centre.  At the welcome centre they offer a 20 minute movie (which I highly recommend) which tells you a little of the history of the mountain but focuses on the 2010 eruption.  This volcano is a glacier and it erupts from the top of a a rather flattened crater.  Back in 2010 this erupted spewing hundreds of millions of tonnes of ash into the air, affecting millions of people and flights all over Europe.  There is a farm at the foot of this glacier that stood then and still stands now and its their welcome centre that they built and their side of the story that they tell.  Slightly to the north east of this volcano is his big sister Katla, which usually always erupts after Eyjafjallajökull but always on a bigger scale.  That's the really bad one we were told.  However, Katla didn't erupt after the 2010 eruption of Eyjafjallajökull so she is surely due.

Heading further east we made our way to a little town called Vik that was suggested to us by the lady at the volcano.  There, she told us, we would find a famous Black beach.  As we drove, we noticed cars parked up and the typical sight of tourists with camera's
flashing so pulled up outside this farm (turns out it was a guesthouse) to see what was going on.  There, built into a giant rock were these smallish houses.  About 3 or 4 of them.  If you didn't know this, Iceland has a love affair with elves (not kidding) and many a construction has been stopped so as not to upset the elves.  Drangshlid offers such a place where you can see the houses that have been built (by people of course) to keep the elves happy.  There are much smaller ones and these, by comparison to some pictures I've seen are quite big but they are still quite stunning to see. and the way its been built into the rock is really quite amazing. 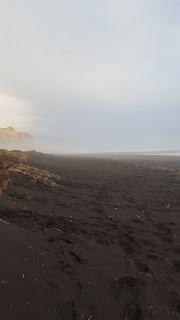 Traveling on, we made our way to Vik which is a lovely little town hiding in a bay behind more mountains.  When I say little town, it really is with perhaps 30 houses, a church on the top of the hill, a school, a police station and a pit stop for petrol, souvenirs and a bite to eat.  (Forgive me citizens of Vik if I missed anything) but what it has to offer is the most stunning beach with pitch black sand and roaring waves.  Pete is NOT a beach guy.  He usually waits on the sidewalk while I go get my feet wet and full of sand, so I was impressed when he ventured right onto it and walked towards the waters edge. 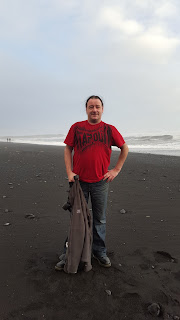 It was surprisingly warm.  Well, when I say warm, I mean it wasn't freezing bloody cold and here Pete is showing off by taking his jacket off.  Me, being me, had to go stick my finger in the water to feel just how cold it was and yep....its cold enough to gasp and hurriedly take your finger out of the water.  We stopped here and had a late lunch and just enjoyed the lovely tranquility that Vik had to offer.

The Abandoned DC plane at Solheimasandur 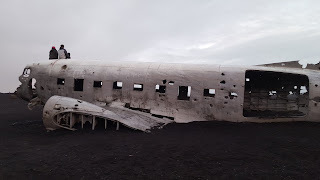 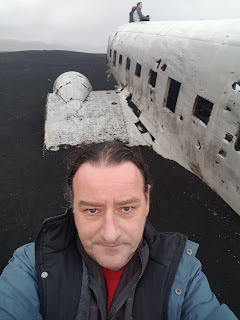 It would have been about 3 or 3:30pm by the time we decided to head back home to Reykjavic and we didn't want to have to drive too much in the dark.  Route 1 - the main road that goes right around the island of Iceland is a good road but not much lighting and there is a lot of nothing between towns.  Shortly after leaving Vik, Pete mentioned seeing a lot of people walking to somewhere and wanted to know where they were walking.  Judging by the direction they were walking I suggested the beach but it did seem a bit odd when they could just drive a little further to Vik and not have to walk on some unmarked path.  We parked up when we came to it - there was an actual car parking section with roughly 20 or so cars parked and Pete debated if he should or shouldn't go walk and see where they were going.  I grabbed my iPad and searched google maps and saw this tiny little spec of white when I zoomed right in with the heading 'Solheimasandur Plane Wreck' and told Pete.  He got all excited and said he had heard about it and he was off....for a walk!  What he didn't realise was that it was going to be an 8km round trip!  I read all this up after he left (thank god I stayed in the car!) and decided to go for a nap for what I knew was going to be a long wait.  After about 30 or so minutes he texted me, complaining and was all like 'WTF?' and it was then that I broke it to him that he had a 4km walk each way.  Anyway, kudo's to him he did it and has the pictures to show for it.  His cross face in the pic of him with the plane is explained now :)

Please continue on to part 5


Posted by Bernadette Davies at 15:29

Enjoyed. Thanks for taking me with you.