Around a year ago, I was considering what to get my husband for his 50th birthday.  Because it was a milestone birthday, I wanted to make it special so after consulting the kids, opted for one item on his wish list - the northern lights - and started preparing for a trip of a lifetime to Iceland, where the northern lights abound during the winter months, if you are lucky!

I have to be honest.  I managed my expectations right down.  People complained about how expensive it was in Iceland and I knew I was going to be traveling to a winter country and if anyone knows me, they know I am not a fan of the winter.  I kept telling Pete to not think of it as a holiday and think more along the lines of adventure and I imagined us packing picnic lunches and suppers as the food would be too expensive and eating on the road as we ventured around.  I went out and bought thermals, boots, gloves, the whole shebang and didn't get too excited when the time finally arrived for us to go.  I couldn't have been more blown away and in awe of a country which is really not that far away and yet, so incredibly different, beautiful and surreal.

The first little bit of odd to hit me when we touched down at Keflavic airport was the fact that it was 10.15am and the sun was only just rising.  This became the main challenge of our holiday - chasing the sunlight - as there is a very limited amount of day light in the winter months.  With the sun rising around 10-10:30am'ish and setting between 5-5:30pm'ish you are very limited to how far you can travel especially if you are based in Reykjavik. 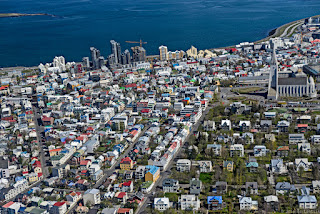 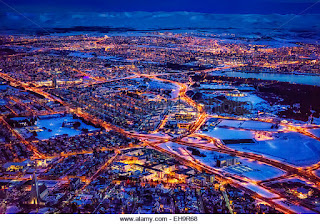 My second surprise was Reykjavik.  I totally had the wrong idea in my head!  I had seen some pictures and imagined it to be a small harbour town - pretty of course - but I was totally surprised by the actual size of it.  Don't be mislead, Reykjavik is big!  The main area - or centre of town if you like, is smallish with one or two narrow main roads which pass along a stream of restaurants and hotels and seem to lead straight to the harbour.  But move outside of that and it sprawls out ahead of you with tall buildings, more hotels, and a conglomerate of industries.  I saw HP and Mercedes Benz, to name just a few and while it won't compare to any of the major cities in the UK its not a tiny little hamlet either.  With the amount of tourism Iceland is getting right now, I imagine they are growing at a rapid rate and by all the construction cranes that I saw dotted all over the city, it would certainly seem so.

That first day we booked into our hotel, walked around and became acquainted with Icelandic Krona and found out just how expensive the beer and wine actually was...and its dear folks..its really expensive!  You are looking at around £6+ (cheap in Iceland!) for a beer but its not unusual for it to be around £8-£9 for a pint.  Food is expensive too, but not as bad as alcohol.  The reason its so expensive in Iceland is because they have to import EVERYTHING.  Their chief exports is aluminum and fish. Everything else is imported and I am hoping that if the tourist boom continues as it is to Iceland at the moment, they may manage to cut down, even if just a little, on the price of food and drink.

That night I got to feel, with my own bare hands and ears just how bloody cold it gets in Iceland!  As the sun set (Around 5.15pm) I wrapped up warmly and Pete and I headed out to get some supper.  It had snowed in Iceland the day before and the ground was covered with ice and we had to be careful where we walked so that we didn't go slipping everywhere.  It wasn't too bad in Reykjavik centre but you could feel the biting wind cut through any thin layers of clothing you had on and ducking into a warm bar or restaurant became a very welcome relief to not only us, but to the many tourists who were meandering around.

If you are going to Iceland and start talking to people or doing some research you will come across this term a lot.  The Golden Circle is made up of 3 awesome Iceland attractions.  Where the tectonic plates meet, (2 on the map) the great geyser (3 on the map) and the Gullfos waterfall (4 on the map).  Each of which are awesome to behold and introduces you quite literally to the wonders of our natural world. 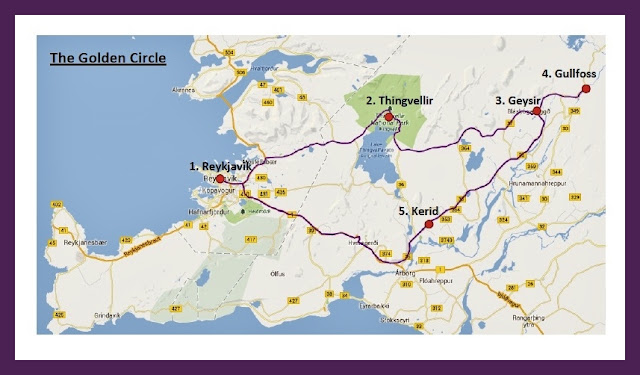 You can, if you have enough daylight, do all three in a day if you push it I guess, but we did this over two days, exploring first the tectonic plates and then returning to Reykjavik and then the geyser and the waterfall on the next day.  In the picture above they show a 4th attraction (Kerid - which is a giant crater) but as far as my knowledge goes that is not generally considered as part of the Golden Circle and I am going to be a bit guttered if it is as that is one we didn't see.


Posted by Bernadette Davies at 14:31