So day 3 saw us up and out quite early (and in the semi-dark as the sun started to rise)  Everything was still so pretty and white and as we traveled we drove straight into a snow storm and I filmed it as Pete was driving - I loved it!  and again all i wanted to do was get out and go play snow angels or build a snowman or have a snowball fight (I'm such a bloody child sometimes!)

We drove further east this time, past where the tectonic plates were on display onto a place called the Geysir Geothermal Field.  The name is where geysers actually got their name from and this particular one is the 2nd largest in the world.  But its not so active and from memory, the big mother 'Geysir' hasn't erupted since around the year 2000 - though when it does, it is said to erupt around 80m into the air.  The whole area smells like sulphur and there are mud pools and cracks open up in the earth where boiling water comes bubbling forth. Again you are astonished at mother nature and her ferocity and are constantly reminded of just what is going on under your feet. 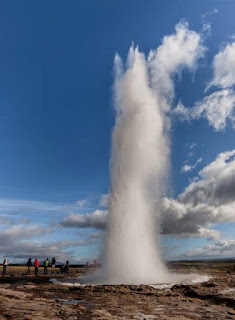 Only around 50 or so feet from the big mother is another smaller geyser which does erupt around every 5-10 minutes called Strokkur geyser and this was hugely fun and awesome to watch.  She would spout huge amounts of water around 30 or so metres into the air drenching anyone who was downwind.  As the water hit the ground and flowed down the tiny streams it would turn to ice but that water that flowed all the way to the little boiling pots would hiss and turn to steam.  Pete and I watched this geyser blow a number of times, never getting tired of hearing the hiss and watching this huge plume of water get thrown high into the air.  At times it would go really high and other times less so, only making you want to stick around and wait for the next one to see if it would go higher.

There is a massive shop where you can buy all sorts of clothes and geyser souvenirs and 2 places to eat and even a hotel right across the road if you fancy staying the night.


After Geyser we headed a little further north east up towards Gullfuss.  Its not too far at all from Geyser but the contrast from the brown, sulphuric, potholed landscape is astounding.  Its also not a case of one minute you are driving and you round the corner and boom you see it.....No....you have to walk slightly down into a valley and then boom...you see it.  And it blows you away!

Gullfoss waterfall is something quite beautiful.  Its an awe inspiring display of the power of nature as hundreds of thousands of litres of water come tumbling over not one, but two precipices. 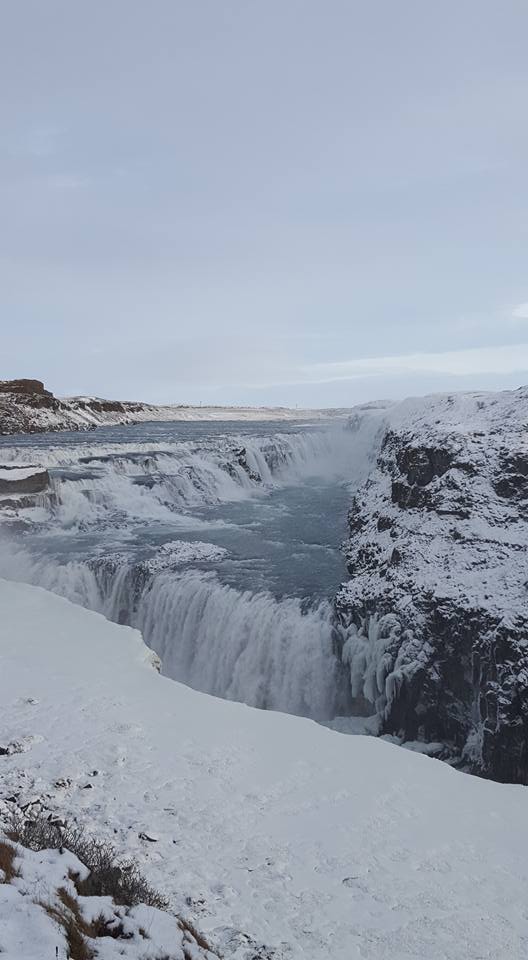 'Gullfoss is one of the most popular tourist attractions in Iceland. The wide Hvítá rushes southward, and about a kilometre above the falls it turns sharply to the right and flows down into a wide curved three-step "staircase" and then abruptly plunges in two stages (11 metres or 36 feet, and 21 metres or 69 feet) into a crevice 32 metres (105 ft) deep. The crevice, about 20 metres (66 ft) wide and 2.5 kilometres (1.6 mi) in length, extends perpendicular to the flow of the river. The average amount of water running down the waterfall is 140 cubic metres (4,900 cu ft) per second in the summer and 80 cubic metres (2,800 cu ft) per second in the winter. The highest flood measured was 2,000 cubic metres (71,000 cu ft) per second.
As one first approaches the falls, the edge is obscured from view, so that it appears that the river simply vanishes into the earth.' (source - Wikipedia)

If you look to the right of the waterfall you can see the huge columns of ice that has formed and this can be seen all over.  I can only imagine how beautiful this must look in the summer when its all green.  I can also honestly say I have never in my life been as cold as I was here.  Trying to hold my iPad and take pictures - I had to remove my glove to press buttons on the screen - I could not feel my face or my hands due to the cold and the water from the falls hitting my face.  It was truly beautiful to behold but I was glad to get out of there and get back up to where the spray couldn't get me anymore.

I can't say which of the three Iceland landmarks that make up the Golden Circle was the most beautiful, or the most amazing.  They were all humbling and awe inspiring in their own way and if you ever make it to Iceland, summer or winter, it's definitely a must-see. 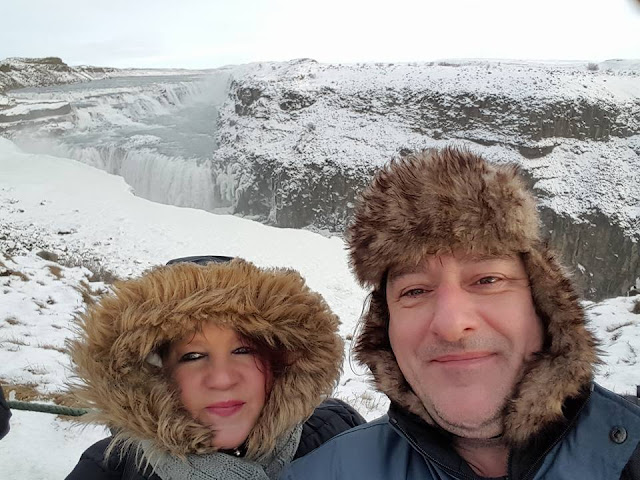 After, we headed a different route back towards Reykjavik, down towards the south coast but then turning west as we started to lose daylight. We crossed over small bridges and saw that same river that had cascaded down the waterfall rush underneath us towards the sea.  Driving between narrow little mountain passes and appreciating the volcanic rock formations as they just lay there either side of us.  A stunning, stunning landscape!

please continue on to part 4

Posted by Bernadette Davies at 15:05