On our second day in Iceland we hurried out of bed, had our breakfast (while it was still dark outside at 9:30am!) and headed out to go take in the sites of Iceland.  After first picking up the rental car and figuring out the sat nav we programmed it to take us to þingvellir national park and traveling east out of Reykjavik we were on our way.  Admittedly we left rather late in the day.  A combination of only been able to pick the car up at 12 and getting lost trying to find the rental place it would have been more like 1pm before we were finally on our way.  As we traveled east we drove through a sprawling Reykjavik and then up over a snow covered mountain.  I was blown away at the beauty of it all, so white you couldn't be sure where the land ended and the sky began. To the left and to the right of me everything was white, covered in so much snow all I wanted to do was to stop the car and go play snow angels in it. 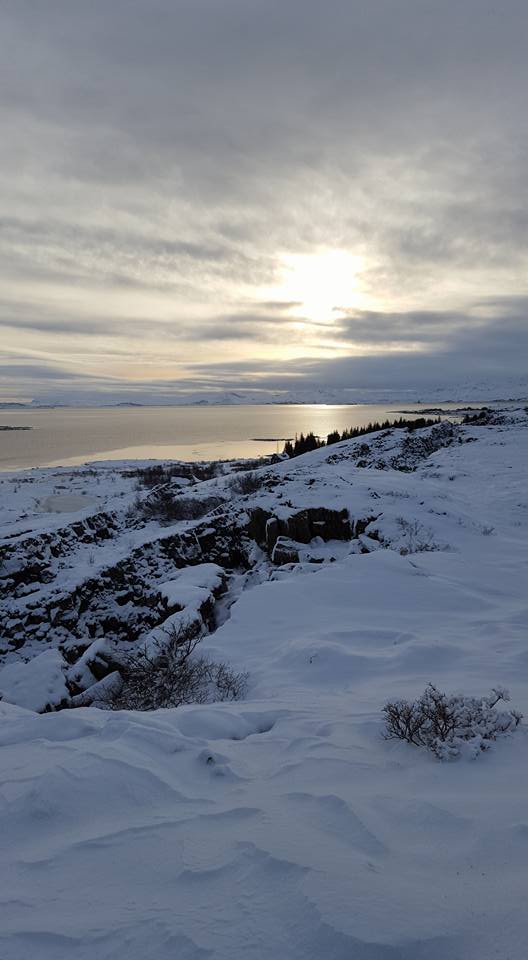 The þingvellir (Thingvellir) National Park offers breathtaking views of where the North American and the Eurasian tectonic plates meet.  Or rather, where they are slowly pulling apart. The plates are moving around 2.5cm apart per year, meaning that the Atlantic ocean is getting wider in an east-west direction by this much every year. For a little more info on this please go here. 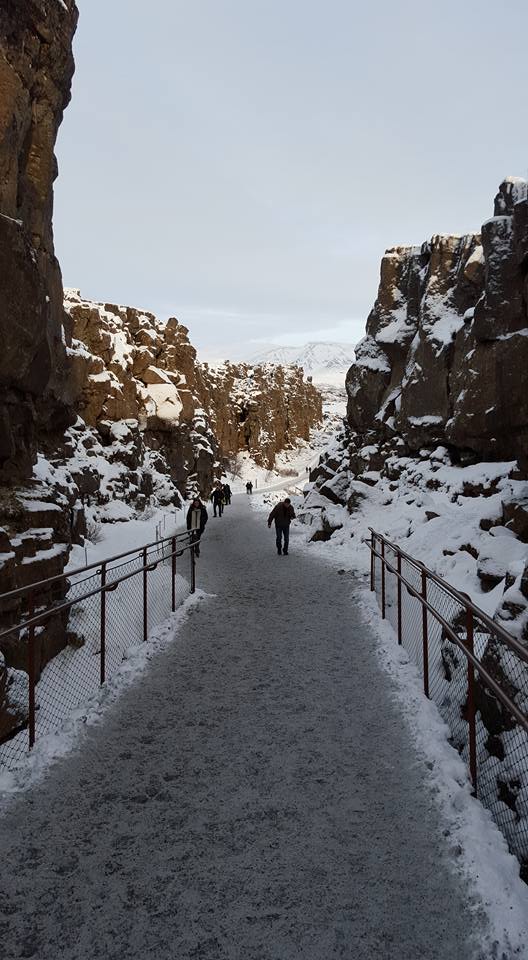 Þingvellir is also the national shrine of Iceland. It is, for one, a key location in Icelandic history as the oldest existing parliament in the world first assembled there in 930 AD. (source - Wikipedia) 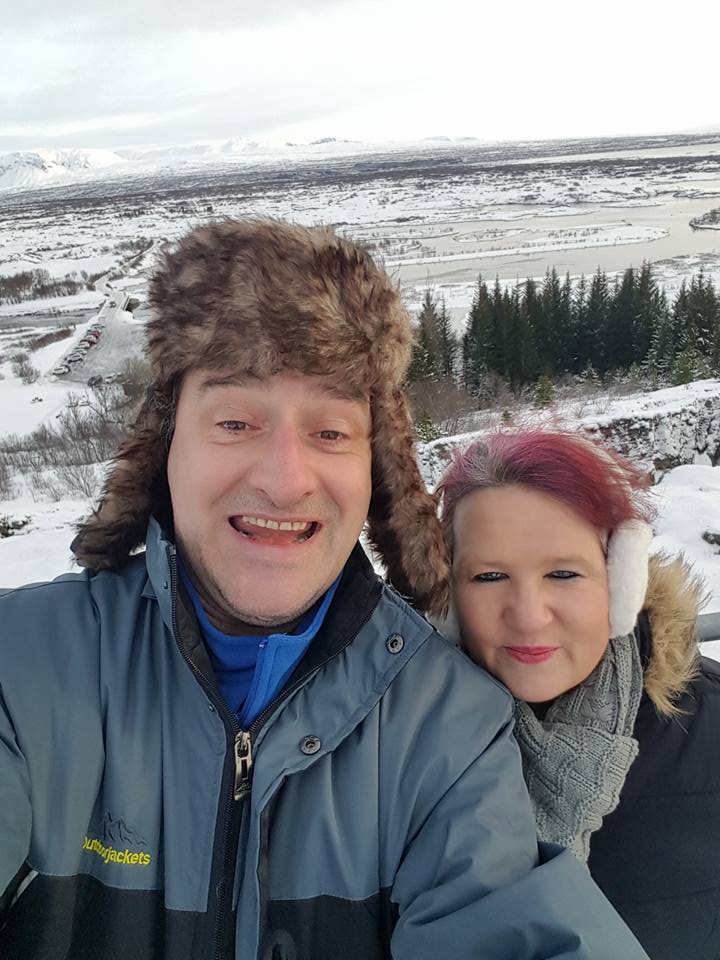 There is a huge lake and lots of smaller frozen ponds surrounding it and its clear to see why this has been turned into a national park with so much natural beauty for as far as the eye can see.  Looking at the picture of Pete and I and if you look just behind my head you can see the rock jutting out...that would be the Eurasian plate slowly pulling away.

We did climb back into the car and thought about going to the second landmark (The Geyser) but drove only a few kilometers when we hit snowed and iced over roads and decided to head back to Reykjavik instead as we were starting to loose day light.  And its a good thing we did too as the roads were treacherous and we would have had to travel back over those iced over roads in the dark if we had continued on!

Arriving back in Reykjavik and finding hotel number 2 was a little bit of a let down.  I took one look at the front door of the hotel and thought 'Oh dear!' as the steps we had to carry our suitcases over were covered in what looked like spilled beer and possibly something else!  'This is an adventure' I kept telling myself and to be fair, it looked decent enough inside and felt and smelt like heaven.  On trying to check in we were giving the best news!  'We are terribly sorry but we have had to move you to another hotel' she told me.  'But not to worry, it is an upgrade for you and they offer hot breakfasts along with a spa and a restaurant.'  Well....that was lucky!  This is the second time this has happened to us.  We once got upgraded at Sun City in South Africa from the Cabana's to the Palace Hotel and I literally had to pinch myself when that happened!  And now again and while this upgrade wasn't quite as epic as that, it was still pretty awesome when I got to see where we were heading! 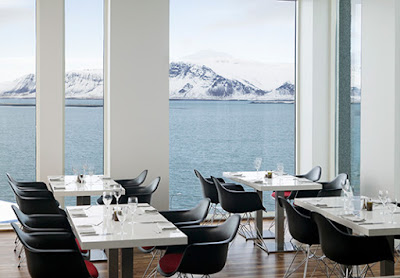 Upgraded from a £90.00 per night hotel to £230+ hotel a night, CenterHotel Arnarhvoll was really rather nice.  We were lucky enough to get a sea facing room and were treated to a full mini-bar, breakfast included and the best part was this hotel was going to be our longest stay hotel so we were set for the next three nights!

The down side is we could hear the wind howling all night long and only opening the small window would stop that but would mean we were letting the arctic in.  The restaurant on the 8th floor offered fabulously pretentious dining and while I rather like that, the limited menu didn't have a lot on offer. 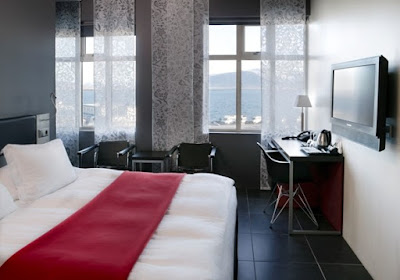 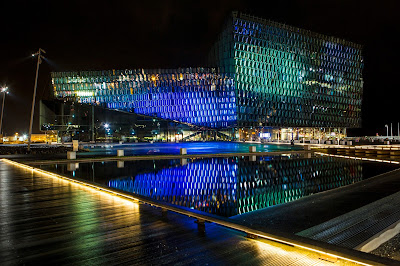 Opposite the hotel we had a wonderful view of the harbour, the mountain across the bay and the much acclaimed Harpa Conference Centre, or Concert Hall which is truly an amazing structure to be seen at night.  The windows are set to lights and all during the dark hours its like witnessing a light show as different colours dance across the windows of the concert hall. Pete mentioned that they were probably trying to imitate the Northern Lights and I reckon he is probably right.  The hotel itself had a spa which I would have loved to use but due to our time constraints and chasing of the sunlight all the time there simply wasn't enough time   We ate there 2 of the three nights we stayed there and the food (and the breakfast) was very good.  A very very lucky upgrade indeed!


For that evening I had booked an excursion for Pete and I to go see the Northern Lights.  It was a rather cold night, standing outside next to a bus in the dark waiting for these magical lights to appear.  And we waited and we waited and to be honest, I wasn't really sure exactly what to expect.  Would fantastic green lights just suddenly start appearing in the sky?  At around 10:30 the tour bus dude came to me and said to look in another direction...the lights had appeared and I was like ...where?
I really was confused.  There was no magical green swirls in the sky?! But there was something that looked like a thin grey cloud that seemed to be getting lighter and was moving in a rather odd way.  THIS turned out to be the northern lights and I have to admit I was rather disappointed and underwhelmed. We stood around watching it and it disappeared soon after and I am not really going to blog much about that excursion because in comparison to the Northern Lights we DID see on our last night, this really wasn't much to write home about.

Please continue on to part 3


Posted by Bernadette Davies at 14:56