King of the street 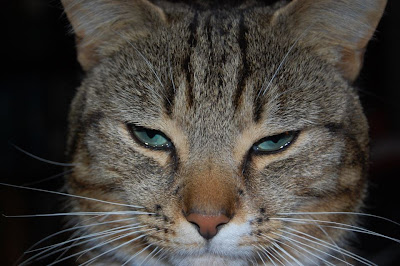 A few months back, I'd guess about 8 or so months though I would have to check Facebook comments to work out exactly when, a cat came running down the road towards my house and up to me as if he was my long last child.  He meowed and purred and rubbed himself against my leg and although I had never seen this cat before in my life, he acted as if he was returning home after a long journey and was immensely happy to see me. I like that in a cat.  Actually I like that in people too, but then I don't expect them to meow and purr and rub themselves up against me, but anyone who would treat me as if they were truly happy to see me like that would certainly get my undying attention.
I fussed a little over the cat and fully expected him to turn around and continue on his journey.  The only way he was headed though apparently, was into my house and he never left. Of course, I found it all rather amusing, but stressed to my family not to get attached because after a quick check I found out he was a male and explained that male cats wonder and that he would soon be off on his merry way again. That was 8 months ago.

We couldn't keep calling him cat though, and if I remember, the first name we came up with was Tigger. This only lasted for a day or so, because upon further investigation, we all discovered that this cat not only had a personality that was larger than life, he had a pair of balls that any cat would be proud to own.  I don't mean to be crude but when I say he had a pair of balls on him, I am not kidding.  They were impressive!  His larger than life personality was only eclipsed by his larger than what could possibly be considered normal balls. And so, Tigger was no longer and he was proudly named Mr Balls.

Although Mr Balls called our house home, and it was the place he would come to get his meals, sit on someones lap and harass the dog and other cat in this house, he  was most happy out on the street, strutting his stuff and I'm sure setting all the female cats in the neighbourhood's hearts a-flutter.  His latest trick would be to wait by the window in the lounge when I get ready for work and as soon as I pick up my handbag, would accompany me to the front door and promptly run up and down the street following me to the bus stop, showing off all the way and then going on his merry social way. He is not the kind of cat you keep indoors.  He has absolutely no interest in that.  Sometimes though, the rain would get the better of him, and he would stand on the threshold of the door, looking out at the rain, tail poker stiff up in the air and then, as if sighing to himself, would turn around and go back into the house. You could almost see him sulking.

We have a Staffordshire Bull Terrier as well as another mongrel cat in this house too and you would think that Roxy (the staffy) would show Mr Balls who is boss?  Roxy didn't stand a chance. Mr Balls owed her.  Like she did with Sammy the silent cat and me and hubby and the kids.  He has each one of us now purring and rubbing ourselves up against him because not only is he King of the Street, he is also King of this House.

Tonight, however, I look over at Mr Balls, lying on his pillow that we laid out for him earlier (he normally sleeps on my bed) and watch as he just lays there. Unable to eat, unable to drink water, just lying there.  All the life and soul that is Mr Balls is gone because last night, he got hit by a car.
I don't know what happened.  I didn't see anything.  I didn't even notice when he came back into the house.  Nor did I notice this morning when I walked past him just lying at the top of the landing not moving.  It was only when Pete looked into his face as he was going up the stairs that anyone noticed anything was wrong.

There was blood all over his face.  He was breathing funny and Mr Balls was quiet.  Mr Balls wasn't chasing the cat or the dog. He was just lying there.  Panic set in as I thought all kinds of worst case scenarios, and although I knew I had to get him to the vet, I was petrified of picking him up in case I hurt him. I had no idea what had happened or how badly hurt he was.

At the vet it was revealed that he had been hit by a car in his face.  I imagine it must have been a sideways swipe as a car drove past?  His claws are badly scuffed  and his bottom jaw is cracked open right down the middle.  He has lost a few teeth on that side of his jaw and some had been embedded into his jaw by the impact.  These all needed to be removed.  The side of his face is badly swollen, as if he has mumps and right now, there is wire threaded through his jaw and jutting out the bottom of his little face  keeping it all together.  But, as if this isn't bad enough, the vet managed to talk us into getting him castrated as well.  'You will end up saving a lot of money in the long run' he told us, trying to convince us that this would calm him down, keep him at home, stop his gallivanting ways.

I'll have you know, I did protest.  Mr Balls was named that for a reason!  Taking away his jewels would be like taking away his identity.  Or so I felt. The vet assured me that he would still have the same personality and I don't doubt he will have most of it. But I cannot imagine him being alpha male any more.  I see him becoming a fat cat, sitting on the sofa watching the world go by through the lounge window, and I think, if Mr Balls could speak, he would probably say that thought would depress the shit out of him.  But, the vet is probably right and he will probably be in less danger this way and this is why we gave the nod.

Now, Mr Balls is actually Mr No Balls.  Looking over at him, lying there on that pillow, his eyes closed and appearing so miserable I can only feel incredibly sad for him.  When the anaesthetic wears off properly and the jaw mends, is he going to sit there and wonder what happened to his prize bollocks? Or is he not even going to notice and simply settle down to a quieter, safer, more homely life?  At the same time, I am incredibly glad that he is lying there quietly as the alternative would have been awful.  I would much rather have him sat here getting fat than being buried in the ground. I am not sure he will see things that way though?

Get well soon Ballsy....You are still Mr Balls to me, with or without them


Posted by Bernadette Davies at 23:48

Oh Bernadette I am so sorry about Mr Balls.Do hope he gets better very soon. You did the right thing. M xx

That's so sad. He sounds like a huge personality, and now he'll be embarrassed around his mates, LOL. Seriously, sorry to hear of his accident. Mine was knocked over 2 years ago and lost a leg - not sure which is worse for the cat;) So glad he is OK.

I hope that once Mr. Balls recuperates he will be so happy to feel better that he'll be your best friend forever. :)

Jane, had to laugh at your 'embarrassed around his mates' comment. I'm sure he will be, in fact, after he had so much to brag about, and now had nothing, I am sure he will never show his face anywhere near his mates again!

Katy, thank you for your lovely words. He is as loving as ever..maybe even more so. I can only hope that the permanent grimace he has on his face now isn't there to stay forever!