So here is a random topic for you.

I have been doing a little bit of brushing up on all topics (some nonsense, some not so much) over on Netflix the last couple of weeks.  And when I say brushing up, I merely mean watching documentaries on some or other topic that takes my fancy on the day.  I've watched 'Supersize me' (again) and the one about our planet, looking back from 2055 and how we managed to destroy the earth with our continuous overuse of its natural minerals/gases and our huge carbon footprint that's basically killing everything. There was 'The Bridge' which was absolutely fascinating, which is about the Golden Gate Bridge in San Francisco that is on record as being the site with the most suicides in the world and there are quite a few others that I won't go into detail , but the one that I want to blog about is the one that I watched last night entitled 'I Know What I Saw'

Its about people who claim to have seen UFO's. The thing about this documentary, is it doesn't interview regular guys on the street.  It interviews Army Captains, Pilots, Senators and people we would consider rational and of important standing.  All these people have actually seen something.  In 2008 (not 100% sure of the year) there was a conference held in Washington DC where all these people came together and told their story and this 1.5 hour documentary goes to show (and re-enact) what happened in most cases.  It does talk to some regular citizens too - there was this particular case is Arizona a few years back where 100's of people saw something in the sky that nobody could explain yet the US Government tried to explain it away as a joke and basically couldn't answer (or wouldn't).
There was one story of a pilot in the Iranian army who flew up in his fighter jet and tried to shoot at one and then explains what happened next.  In almost all cases, there is someone else to backup the story of the one who is telling it.

In most cases, there seemed to be 2 particular themes.  One, the craft was huge and boomerang (triangular) shaped.  It made absolutely no noise.  (In some cases the craft was mere inches away from the witness).  It travelled with such speed that if you blinked your eye, it would be gone and was able to make 90 degree turns in an instant. When I say huge, one person described it as been big enough for commercial aircraft to land on it. This one seemed to be the more common of the two. The other was cigar (or rectangular) shaped.  All accounts of these were that they were very high in the sky and were seen by commercial aircraft.

There is video and photo evidence to back up many of the stories too.

Not one of them spoke of actually making contact with any alien beings. 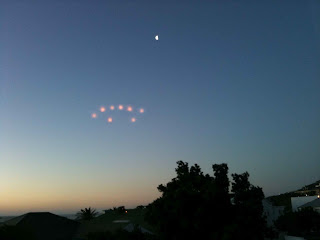 With the freedom of Information act much documentation has now become available in archives and elsewhere around the world where what was once considered 'Classified' is now available for anyone to see.  It also appears that many countries are now preferring to cease keeping accounts like this secret (France being one of them) and on interviewing a Gentleman who works for France's equivalent of NASA, he freely admits that there is something unexplained out there.

So what do you think?  I have always openly admitted that I do believe there is something out there even though I have never seen anything strange in the skies myself.  I have always said that I feel it would be arrogant of us to assume that we are the only intelligent life form in the entire universe - and we cannot even fathom how huge the universe is.  Or, could it be more like what a colleague of mine suggested today, that various world governments were constantly developing new and improved craft/technology in case they needed to defend themselves in a war, hence keeping it secret from the world?
He claimed, that if there was intelligent life out there, why haven't they made contact with us yet.  Good point I guess.  But then I asked him, how do you know they haven't already?  It would make sense to keep things such as this secret from the population.  Could you imagine the mass hysteria if we knew there was a life form out there, infinitely more advanced than us, that could wipe us out if they so choose?  If I was the Powers-That-Be, I would certainly have to think long and hard before I admitted such a thing to the masses.

But what about you, do you believe?

Bx
Posted by Bernadette Davies at 22:56

I want to believe (as the saying goes), and so I do! A lot of the stories we hear are greatly exaggerated, proved to be wrong, or just plain lies. However, there are many others that simply cannot be explained.

The Universe is huge, HUGE, INFINITE, and so surely, at some point in this expanding mass of impossibility, things must stop making sense. Surely there must be a point where everything we know and understand is completely at odds with what's out there?

Thousands of years ago, a kettle would have probably caused whole tribes to commit suicide in fear. So who knows what sort of marvels are out there, in those dark and eternal corners of the Universe?

Good question and have thought about this many times. I do feel that there is something out there. Just what I do not know. Truth or fiction?? Hmmmmmm. Mom

Given that I would consider my mother to be one of the most rationable/sensible people I know, I have to say "I believe." She has seen UFO's on two separate occasions and one of of the two, her brother was also witness.

Another tale I have is of a friend whose ever faithful car was completely dead when she went to drive away one evening; at the same time oddly enough all the streetlights went out! This lasted for a few seconds then everything returned to normal, the car started up and off she went, stopping on her way to tell me the tale. A few days later the local newspaper had a feature whereby scores of local folk had spotted something strange in the sky the same time as my friend experienced the power failure. Were the two connected? Perhaps so!

Wonderful feedback guys! Thank you so much. I hope there will be loads more.

Cory, I agree. Perhaps we just aren't ready yet to know. Perhaps the truth will blow our minds. However, I do believe that perhaps we are more open minded today than our ancestors were 100 years ago.

Mom, thank you for the comment. And I kinda figured you would be on the same page as me.

Maggie, how exciting! And how totally cool! Remind me next time I see your mom to ask her all about it. And thank you so much for your lovely long comment!

Great post posing a very interesting question. I would love to believe that there is something out there and find the whole idea very comforting, but seeing is believing in my eyes. Unless I actually see it for myself and not on some film or photo, I just can't accept. Too rational for my own good, LOL x

I believe! :) I think its just silly and ignorant to believe that in the whole infinite universe we are the only life form out here. Why havnt they made contact? Well, if tomorrow we managed to create a space craft that could send us to another galaxy where we stumbled apon a planet with aliens, I doubt very much the first thing we would do is land for a chat. If I was head of NASA anyway, id order the men on the space craft to watch the planet and its aliens from a distance, figure out what these aliens are like and if they could be a threat to us, etc. But thats just me.. :)

Perhaps we are the most advanced race in the universe?.. everyone expects aliens with advanced technology to come to us... Perhaps throughout the universe Earth like planets exist but are millions of years behind regarding The state of it's evolution? Maybe yet to be formed - possibly even destroyed... Perhaps there is nothing else in this universe & what people believe they see are glitches within the fabric of time (ie parallel universes - see ghosts)................... Blah blah blah....... But the truth is out there Scully

That's a very different way of seeing it Anonymous, and very thought provoking. Yes, who knows? What if it is nothing more than parallel universes colliding? There are infinite theories I suppose. I appreciate your feedback - Regards, Moulder (definitely not Scully :))


Alycia, that is something to consider too. If I was a being from elsewhere, I don't think I would want to announce myself either. Rather, observe from afar, and strike while invisible *big cheesy grin*

Thank you all for your thoughts. I love reading them all x