There is a lot to be said for Virtual Reality you know.  A lot of you who will read this post, will probably think I'm just a little bit sad.  That's OK, I totally get that.  I know I probably would have thought the same if I had not spent the best part of the last 3 years of my life in a Virtual Reality environment.  I would like to tell you a little bit about that.  About my Second Life and what it meant to me.


Some of you may have already heard of 'Second Life'  Some may have spent some time there.  But for those of you who haven't, there is a Virtual Reality community that I happened on totally by accident one day.  I remember sitting in front of my computer and thinking to myself, I wonder what all this virtual reality is about?  I typed it in Google and Second Life was the top link and the rest, as they say is history.


I don't want to bore you with all the little details. Ill just tell you how it was for me.

There was nothing I enjoyed more, than logging on to Second Life (SL) and seeing my 'avatar' appear on the screen.  Unlike traditional chat rooms, my avatar was a hot sexy female who wore some very sexy clothing and got quite a lot of wolf whistles in her time there.  That's the thing about Second Life you see.  You can be anyone or anything you want to be.  If you want to be a gorgeous girlie, then you can.  If you want to be a kitty cat, then you can.  There is almost no limits.  The vampire scene is huge..and there are so many different communities for you to join that no matter what you are into, you will probably find it there.  As for me though, I was human and female (I like to stick to what i know...) and I found SL my escape from my real life.

No, I didn't mean for it to sound as bad as that.  Its just that, logging onto Second Life was the place I went to escape into another world.  A world where I was gorgeous and, as time went on, popular.  I got involved in the online London community and eventually got involved in my own sim.  Myself, and 5 other close online friends created our own little world, where we had people come and visit us, party in our clubs and rent our shops.  It was the pinnacle of my Second Life experience and I truly don't know where I can ever go from there, other than back to Miss Anonymous.

What makes it so good, for me anyway, is that fact that there are no limits.  Imagine a world where you can own a private island and live in a glass mansion, fly short distance and teleport long distance.  Talk to people from all over the world and dance for 5 straight hours without having to sit down and rest.  Imagine a world that is filled with beautiful people, dragons, cats and neko's.  Imagine having your wardrobe with you wherever you are and being able to change from your bikini into your jeans into your ballgown from one minute to the next without breaking out into a sweat.  Imagine logging on every night and having your screen light up with messages from all your friends from all over the world asking you how your day was, inviting you to a new club, getting a wedding invitation or just someone saying hello and they missed you.  This was my world.  And I kid you not, I loved it.

Then there was the drama!  Oh my, the drama.  Once you get fully embroiled in Second Life and make a few friends you cannot help but run into drama.  And I had my fair share of that.  Ive lost track of the amount of nights I have sat there spending hours typing to people about some particular issue or another.  She said that or he did this.  Did you hear so and so quit that or have you heard that so and so have split up ...again!  Even this, made my Second Life the total enjoying experience it was for me.

For a long time I was a greeter, and that entailed helping new born avatars understand 'the game' and get them acquainted with Second Life.  Ive attended weddings - yes, that happens there too - some of which have lasted and some of which didn't last for more than a week.  Ive known people who have died and have visited their memorial sim and placed my candles.  I have visited sex sims...these are truly the best for a good laugh and I have hosted in nightclubs (and in one case co-run one). I have been to fashion shows  and being in outer space.  I have visited Australia, Paris, New York, St Petersburg, Dublin, Cape Town, London to mention just a few, and in all these, I did so with my avatar walking (or flying) around, taking in the scenery and marveling at the imagination of the creators of these sims.  Yes, it is all just pixels on a screen, but its the best online escape I have found and I have been online for a long time now.


But, regardless of everything Ive said so far, the best part of Second Life, for me, is the people. Like most online chat sites, Second Life too is filled with nutters and liars and idiots.  Ive come across many of those there.  Some you spot instantly, some you learn the hard way.  I have been burned a few times, I wont lie.  But on the flip side, I have met the most amazing people.  I have friends now that I would not have had in any other circumstances.  I have got to know people and come to care for them. There are people who I have come to know intimately, I may never have seen their faces but I know their deepest secrets. I have spent hours laughing so much that my sides hurt.  I have come to care for people in Second Life as if they were sisters and brothers that I never had.  Some, I have met up with in real life and we have had as much fun in real as we do online, though dancing for 5 hours straight has proven to be somewhat more difficult.  Its the people that make it what it is, and I thank Second Life for that. 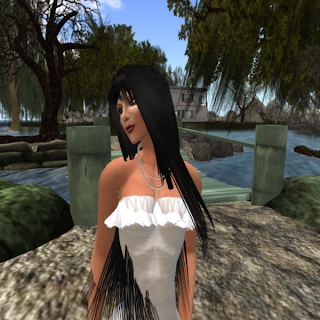 But, for now, I'm giving it a bit of a rest.  I had started to spend too much time in my Second Life.  So much so that my First Life was suffering. It became far easier to log onto SL at night and immerse myself in my little online world than the deal with my real life issues.  Thankfully, I finally saw that and I've put things into perspective now.  This blog has also helped.

Second Life has got a lot of bad press, and in many cases I can understand it.  It has caused marriages to break up and it has put people together who would otherwise never have known each other.  I can understand why the marriages break up.  Its the perfect world, as I said before, everyone and everything is perfect.  Romances blossom around every corner in Second Life and it is very easy to get carried away.  You need to have a strong mind not to get carried away by all of that.  But bad press aside, I would never say anything bad about it.  I truly loved it and still do.  And ultimately Second Life is what you make of it.  I will miss it while I take a much needed break, but its good to remember that I do have a real life too, and that I can make that as enjoyable and fun as I made my Second Life.  Or atleast I can try to!

This has been my longest post ever.  I have meant to blog about this for a while, and as I said in the beginning, I know there will be those out there reading this who will not understand why I am so passionate about this.  But unless you have spent some time inworld, you wont understand the addiction, the pull of it.  The fun and the joy it can give you.  The highs and the lows.  The intensity. That is only something residents of Second Life (or other similar virtual reality sites) will understand.

Ive probably bored you to death, so I will stop now.  Its been fun typing this and I would love to hear your opinion on this, if you have any.

Until later then, take care and Ill blog again soon

B x
Posted by Bernadette Davies at 22:39